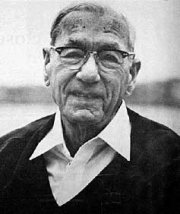 Carl A. Alberg was born in Gothenburg, Sweden in 1900. He was one of the most prolific yacht designers of the 20th century with at least 56 designs to his name.

Alberg's career coincided with the newly developing fiberglass boat-building techniques beginning in the late 1950s, and the founding of Pearson Yachts, one of the pioneers in the field. Thousands of boats designed by Alberg were built by Pearson and others, and most are still sailing to this day. Among his most well-known designs are the Pearson and Aeromarine Triton, Bristol 27, Pearson Ariel, Commander, Ensign, Alberg 30, Alberg 35, Alberg 37 and many of the Cape Dory designs.

The vast majority of his designs were built in the US where he spent most of his life. He was adamant about what he considered a good, safe design and resisted the trends toward fin keels, spade rudders and flat bottoms. His designs are typically recognizable, with long, graceful overhangs, low-slung sheerlines, narrow beam and sweeping full keels that are cutaway in the forefoot, designed to the CCA rules of the 1960s. It has been said that Alberg had but one boat design and simply scaled it up or down as needed.

Andrew Vavolitis of Cape Dory Yachts said, "I always asked Carl to design me the beamiest and shallowest boat possible. Then he'd go away, and what he came back with, was what we used. Of course, it was never as beamy, or as shallow, as we liked. He never compromised his design principles."

Carl passed away on August 31, 1986 at his home in Marblehead, Massachusetts. His 56 designs resulted in over 10,000 boats. This site is dedicated to Carl Alberg and the graceful, sea-kindly boats the "stubborn Swede" designed, that have brought generations of sailors so much enjoyment.